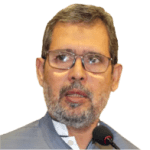 The thoughts and ideas, which were once pride of the modern-day civilization, have starting fading since the past century. Apparently, having won the battle of the bipolar world, the West needed a new global enemy to serve the interest of its capitalist system and fulfill imperialist objectives. Since there was no enemy in sight, it therefore, started carving a new one. For this purpose, the West chose Islam, its manifestations and Muslims as new target. The United States considered it necessary to keep the NATO alliance intact under its supervision as it has established its dominance over Europe through NATO. Washington, therefore, kept NATO engaged in Africa, Asia and other regions, and the consequences are not hidden from anyone.

Islam was equated with terrorism. Terrorist groups were created within Muslim societies and then the slogans they raised were called the face of Islam. Numerous measures were taken to harmonize their societies with these goals. Hateful acts against the Prophet of Islam (pbuh), the Holy Quran and the minarets of mosques were taken, while the hijab of women was made a symbol of hatred. Caricatures of the Holy Prophet (pbuh), the mercy for the entire mankind, were published to show him, God forbid, a terrorist leader. Many books were written against him and ‘Satanic verses’ is one of them.

The Muslims raised their voice against these sacrilegious acts. Instead of offering apology, the Western governments joined the fray in the name of freedom of expression. The situation worsened to the extent that attempts were made to burn the Holy Quran. Muslim women were asked to remove hijab. The hijab was banned in educational institutions, in government departments and offices, while burqa-clad women were attacked and some were even murdered in public.  All these incidents took place in the West and they are still taking place there.

Some extremists compared mosque minarets to missiles, and called them a symbol of terrorism. Political parties also used anti-Islam rhetoric for political mileage. In societies which have very small number of Muslims, an atmosphere of Islamophobia was created to bag votes. This is how bigot people in the guise of politicians managed to enter parliaments.

The West says its modern civilization is based on freedom of expression, but the same is being taken away from Muslims. The Western civilization champions freedom of religion, but the freedom of practicing Islam is getting excluded. As a result, Western societies are themselves falling prey to extremism. Rising extremism may, at some point, spiral out of control but the process to achieve global agenda and plunder the resources of Muslim world goes unchecked. The Muslims still have a lot of wealth, which entices the oppressive and ruthless capitalist societies, so the battle is yet to end.

India is already notorious for its anti-Islam mindset. In the past, Congress leaders did not take seriously the message of solidarity from Muhammad Ali Jinnah, the messenger of peace, and under the arrogance of being Hindu majority did little to appease Muslims. This led to the creation of an alternative political platform for Muslims. Even before the partition of India, attempts were made to bulldoze the political worth the Muslims gained after the elections. Such attitude led to the partition of India. This partition was also a lesson for the newly created entities.

The ruling class of India should have thought that keeping the left-over Muslims and other minorities glued to the Indian majority was in the interest of the country. The then Congress leadership had some realization of the fact and it framed the Constitution on a secular basis and adhered to the slogan of secularism for a long time. However, many incidents and actions in the background are characterized with anti-Muslim sentiments. The military invasion in Kashmir and its occupation by India is just one example.

Enmity of Indian rulers towards Pakistan reflects their mentality. The military occupation of Junagarh and Hyderabad states, which joined Pakistan, by New Delhi was in violation of the formula of the partition of the Indian subcontinent.  It did not stop there. India’s massive military intervention in East Pakistan in 1971 and converting it into Bangladesh is yet another manifestation of its enmity towards the neighbouring Muslim country. So much so that Hindu extremist eliminated their leader Gandhi for pitching for harmonious relations between Pakistan and India in future.

The elements who assassinated Gandhi are now in power in India. The incumbent Indian Prime Minister, Narendra Modi has proudly acknowledged his role in creating Bangladesh during his visit to Dhaka. Only a butcher like Narendra Modi can boast such naked aggression. The proponents of Hindutva ideology are roaming scot-free in India today.  This ideology is not ready to accept and respect any other religion. The recent treatment meted out to Sikhs is the outcome of the same terrorist bigotry. The Christian community is also facing the same hatred in India.

A brazen war is now being waged against hijab in India. The West has already launched an anti-hijab campaign. Many Western rulers and politicians are part of this war in India, which makes the situation further worsening. Although sporadic voices are raised at home and abroad against the hijab ban, yet they are weak and feeble. Muslim girls have been banned from wearing hijab in classrooms at several educational institutions, darkening their future as these acts could deprive them of education.

Regrettably, India’s Supreme Court has justified the demolition of the Babri Masjid. Similarly, the Karnataka court has upheld ban on hijab. It seems all basic institutions in India, including government, administration, parliament, judiciary, army and a large section of media, have joined hands in enmity towards Islam. The collusion of state institutions is taking the shape of Hindutva, which may also be called ‘Moditva’. Many well-wishers of India are forced to acknowledge that if this practice continues, India will be disintegrated, because besides 210 million Muslims, other minorities also consider themselves unsafe in India. The prevailing situation in India also offers a lesson for the institutions and people of Pakistan.

Imam Khomeini, Founder of the Islamic Revolution Philosophical Aspect (Part-2) By Syed Saqib Akbar Imam Khomeini’s letter to Gorbachev, the last president of the Soviet Union, which was written almost 34 years ago, was seen Read more…

Imam Khomeini,Founder of the Islamic Revolution Philosophical Aspect (part 1) By Syed Saqib Akbar The 43rd anniversaryof Islamic Revolution of Iran is fast approaching. Its influence is growing all around world. Hardships have always been Read more…